In this tutorial you will:

The Skills screen may be a little bit overwhelming at first. There are so many skill trees and skills to choose from. The Skill screen however is not hard to get used to and is easy to understand.

Active abilities can have very different effects. Hovering an ability with your cursor will give you more information on casting the ability. Important are the Cast time, Target, Range and Duration. If your distribution of attribute points is well focused, you should not be worried to much about how many resources an ability uses. E.g. if you decide to slot a lot of Magicka using abilities, it would be wise to have a large pool of Magicka or have very high Magicka regeneration.

Each skill tree has its specific active abilities. Except the racial skill tree. It also depends on your class which skill trees you will have. In the example of the image below, one can see the Aedric Spear, Dawn's Wrath and Restoring Light trees. These are specific class trees only accessible by the Templar class. 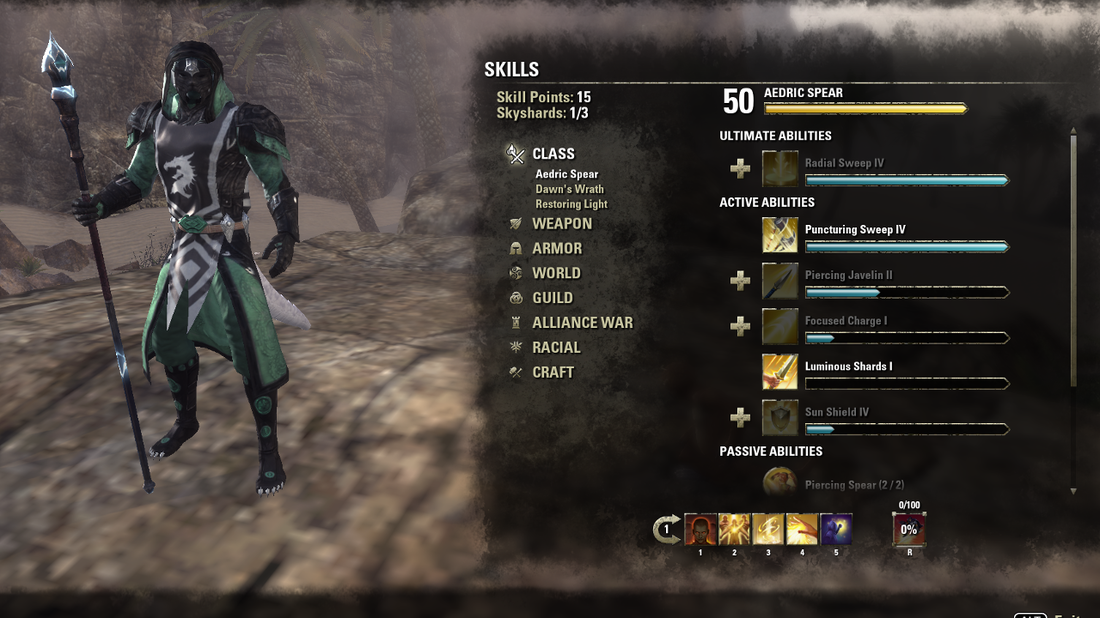 NOTE:
- Earning skill points can be achieved by completing quests, finding skyshards and leveling up.

What are passive abilities?
Passive abilities are buffs for your character that go into effect immediately and do not require any input from the player

Ultimate abilities also have wide variations of Cast time, Target, Range and Duration. Make sure you read the information provided when hovering an ultimate ability. And prevent that you casted an ultimate too late, because you misjudged the casting time or range.

Racial abilities are a bit like Class specific abilities. They grant your character with special abilities which are (mostly) passives. Each race has different racial abilities and are tailored to fulfill a specific role.
For example the Argonians have the Restoration Expertise and Quick to Mend passives. Which increase healing abilities a lot. And the Khajiit having the Stealthy and Carnage passives. Allowing for better stealth and more critical weapon rating. Which is awesome for dealing lots of damage.

Combining your racial abilities with active and passive abilities can create a powerful synergy. Allowing you to become the indestructible Tank, the Damage dealer that hits like a truck or a powerful healer.

﻿Next tutorial is not available yet, please return to the overview instead.﻿

All text, artwork, graphic material, copyrights and trademarks are property of their respective owners